Chat with us, powered by LiveChat
The Essential sale - Save £100 Now Limited offer

Breakfast is considered an important meal because it breaks the overnight fasting period, replenishes their supply of glucose (body’s energy source) and provides other essential nutrients to keep their energy levels up throughout the day. In general, kids and teens who eat breakfast have more energy, do better in school, and eat healthier throughout the day.

But do we really know what we’re serving our children every morning?

Sugar is the ‘alcohol of the child’, yet we let it dominate the breakfast table 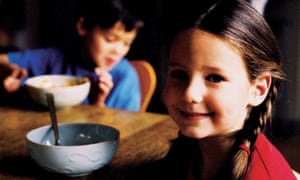 ‘On average, cereal contains a whopping 12g of sugar, all added, in a typical serving.’ Photograph: Stockbyte/Rex Features

With kids consuming half their sugar quota first thing, it’s no wonder they’re getting diabetes and liver disease. We have to fight corporate interests

Breakfast is considered by most nutrition experts, including Public Health England, to be the most important meal of the day. It gets your brain and your metabolism going, and it suppresses the hunger hormone in your stomach so you won’t overeat at lunch. But in our busy lives, it’s easy to turn to what is quick, cheap, or what you can eat on the go. Cold cereal. Instant oatmeal. For those die-hard “I’m gonna serve something hot for breakfast” types, it’s microwaveable breakfast sandwiches. Gotta get out the door now? Granola bars. Protein bars. Yoghurt smoothies.

Sadly, as the National Diet and Nutrition Survey found, what you’re really doing is giving your children a huge sugar load while sending them on their way: half of their daily intake on average. There’s a reason that the World Health Organisationand the United States Department of Agriculture have provided upper limits of sugar – because dietary sugar fries your kids’ liver and brain; just like alcohol.

Alcohol provides calories (7kcal/g), but not nutrition. There’s no biochemical reaction that requires it. When consumed chronically and in high dose, alcohol is toxic, unrelated to its calories or effects on weight. Not everyone who is exposed gets addicted, but enough do to warrant taxation and restriction of access, especially to children. Clearly, alcohol is not a food – it’s a dangerous drug, because it’s both toxic and abused.

Dietary sugar is composed of two molecules: glucose and fructose. Fructose, while an energy source (4kcal/g), is otherwise vestigial to humans; again, there is no biochemical reaction that requires it. But fructose is metabolised in the liver in exactly the same way as alcohol. And that’s why, when consumed chronically and at a high dose, fructose is similarly toxic and abused, unrelated to its calories or effects on weight. And that’s why our children now get the diseases of alcohol (type 2 diabetes, fatty liver disease), without alcohol. Because sugar is the “alcohol of the child”. Also similar to alcohol, sugared beverages are linked to behavioural problems in children.

On average, cereal contains a whopping 12g of sugar, all added, in a typical serving. In the US, the Environmental Working Group (EWG) in 2011 identified 17 breakfast cereals marketed to children in which added sugar constituted more than 50% of calories, and 177 with 40% or more. Despite the notoriety of that disclosure, the EWG follow-up study in 2014 noted that not one of these breakfast cereals on the top 10 worst list had reduced its sugar content.

Here are two examples of the corporate ploy to ply our kids with sugar. Consider Raisin Bran. Just raisins and bran, right? There are 19g of sugar in a serving; but the raisins only account for 11g. That’s because the raisins are all dipped in a sugar solution to make them much sweeter. Second, my favourite – Lucky Charms – they’re “magically delicious”. Why are there marshmallows in the box? Because oats cost more than marshmallows. They take up room in the box, yet the company gets to charge more. A great business strategy.

But it doesn’t end there. Consider a pot of pomegranate yoghurt, which has 19g of sugar. A plain yoghurt has 7g of sugar, all lactose (milk sugar), which is not a problem. Thus, each pomegranate yoghurt has 12g of added sugar. Plus, the industry hides the sugar well. There are 56 different names for sugar; by choosing different sugars as the fifth, sixth, seventh and eighth ingredients, sugar can rapidly add up to be the dominant ingredient. The US Food and Drug Administration has promised labelling changes to abolish this practice, but the EU has yet to follow suit.

Perhaps the most pernicious danger is that of infant and toddler food. In 2015 the US Centers for Disease Control examined the nutritional information of 1,074 infant and toddler food products. It found 32% of toddler dinners, the majority of child-orientated snacks, and infant-aimed juices contained at least one source of added sugar, with 35% of their calories coming from sugar.

Don’t let your child be a loser by succumbing to corporate interests. Make sure they eat a real breakfast of champions.

Read the article on: https://www.theguardian.com/commentisfree/2017/jan/04/sugar-alcohol-child-breakfast-diabetes-liver-disease-corporate

One easy way to reduce sugar intake at breakfast is to switch out that sugary juice for a nice fresh glass of Virgin Pure water. The water is filtered and chilled, making it a tasty and fresh accompaniment to their breakfast meal.

Your kids will be skipping to school, happy and hydrated!

Everything you need to know about Virgin Pure, our WaterBars and how they compared to other drinking water

See the Water Systems, compares the difference and find out which WaterBar is best for you

Find out why pure water is essential for good health

Try a Waterbar in your home now for 30 days

No products found in your basket.